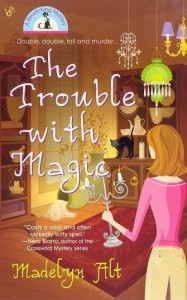 A recent read was The Trouble With Magic, by Madelyn Alt. It’s the first book of a series that’s currently up to eight books — The Bewitching Mysteries. It combined two of my favorite types of book, cozy mystery and contemporary fantasy, so I was predisposed to like it. I was not disappointed. The Trouble With Magic came out in 2006, and the only thing that gave me real pause when I was reading was I had to stop and think about whether people still taped TV shows on their VCRs instead of using DVRs when the book came out. Silly, yes?

Other than that, the book caught me up into small town Indiana, where almost-Bible Belt values mean people tend to frown on people who claim to practice magic — people like Maggie O’Neill’s new boss, Felicity Dow. So when Felicity is blamed for her sister’s murder, not very many townspeople want to jump to her defense. Maggie does, however, and along the way to the solution starts to accept that her own intuition might be just the start of her own hidden talents.

I’ll almost certainly be picking up the rest of the series (who can resist a heroine who records reruns of Magnum, P.I.?), and then I’ll probably be looking for other magic/mystery crossovers, such as Barbara Bretton’s Chloe Hobbs’ Paranormal Mystery Series, Bailey Cates’ Magical Bakery Mystery Series, Carole Nelson Douglas, Delilah Street Mystery Series, and and and . . . yes, there are a lot of witch, ghost, and other paranormal cozy mysteries out there. (For more recommendations, check out Cozy-Mystery.com’s lists of mysteries by theme: ghosts, psychics, vampires and werewolves, witches.)

What have you read recently that you enjoyed?

Recent books I was choosing between to reread.

I love cozy mysteries, and I love going back to read old favorites — for some reason, they seem to epitomize the coziness of the genre for me. END_OF_DOCUMENT_TOKEN_TO_BE_REPLACED