This mystery series features Isobel Santini, the managing editor for River Corners College Press. The books feature recurring characters including her cousin, Michael (the police chief); her mother and aunt; her assistant, Violet; and her best friend, Kimberley.

River Corners is an ordinary college town. It has the typical town-gown divide, the quaint shops, and the diner where everyone goes to grab a quick bite to eat. It has a Christmas pageant every year, children who carol, and enough quirky characters to fill a graveyard.

It also has a killer — and an amateur detective determined to see justice done.

The first book in the series

The first book in the series, The Christmas Tree Farm Murders, was released in 2012.

Isobel Santini is present at the discovery of a grisly murder. Shaken, she tries to return to her normal routine working at the college press, but when her best friend becomes the prime suspect and a second murder follows the first, Isobel has to drag herself out of her slush and into the snow to hunt for clues, much to the disapproval of her cousin, the chief of police.

Along the way to finding the killer, she encounters a handsome newcomer, endures the town Christmas pageant, evades her match-making aunt, and forgets to put up her own Christmas tree. 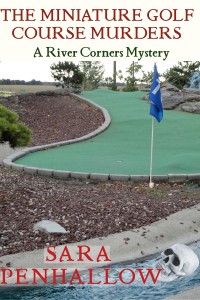 The second book in the series

The second book in the series, The Miniature Golf Course Murders, was released in late 2013.

Isobel Santini solved River Corner’s first grisly murders in decades. She was happy to turn over crime-solving to her cousin, the chief of police, and get back to her life, a life that included a handsome new professor, Greg Stone.

Life doesn’t remain simple, of course. While out on a date at the local miniature golf course, Isobel and Greg discover a dead body.

Around town, tempers flare as the town prepares for its annual Summerfest amidst finger pointing, electoral divides, and town-gown conflicts that usually give the summer a rest. 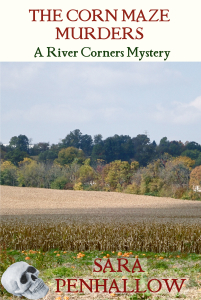 The third book in the series

The third book in the series, The Corn Maze Murders, was released in September 2015.

Isobel Santini has a new challenge: she’s supposed to cook Thanksgiving Day Dinner for the entire family, as well as Greg Stone, the professor she’s been dating. Oh, and his parents are going to be in town.

Then Isobel discovers yet another dead body at a seasonal attraction. Can she solve the murder before someone else dies? When will she find time to practice her pumpkin pie? And how many jokes will her cousin Michael make about food poisoning?

Sara is currently planning the fourth book in the series, The Easter Parade Murders. Sign up for the newsletter to stay up-to-date on progress!